Our Statement of Faith

Redeeming Luv to: our Inward Jew Nation in Christ, Members of the Campaigners’ Temple, all seekers of truth and of the Kingdom; worldwide.

This is In-Jew Freedom Digest; Thursday, May 26, 2016! Let us all give Yahweh the highest praise for sparing our lives to see our 50th years since Independence.  Hallelujah!!!
Message

Society is dependent upon life

Beloved, as Moses, I am a man of few words today. Society exists due to the existence of LIFE where ever it is found. And life itself continues in various specific societies in the animal kingdom from the lowest with shorter life spans to the highest with longer life spans, with beings of similar classification. This brings to mind Aristotle, who defined man, the highest in the animal kingdom and thus with the highest stage of development, as a “social animal.”

Beloved, a Society void of like-mindedness and co-operation is certainly disjointed to no little extent and very little is achieved, if any. For example: of the hundreds of Disciples of Christ, who were in the Upper Room waiting for the out-pouring of the Holy Spirit, nothing happened due to fears, doubts and unbelief, until only one and twenty (120) remained and pursued their purpose according to Yahweh’s will. And it was only when “they were all with one accord in one place,” that society received a mighty out pouring of the Holy Spirit, and “they were all filled with the Holy Spirit, and began to speak with other tongues, as the Spirit gave them utterance.” Amen. [Acts 2:1-4]

Beloved, knowledge is power! In A.D. 33 the Society of the Disciples of Christ each had an understanding of the other and being together they became stronger. Finally, due to their common bond in Christ and their stance upon the Word of God, they received all received the Holy Spirit of Promise

“… And being assembled together with them, commanded them that they should not depart from Jerusalem, but ‘for the promise of the Father ‘which, said He, “ye have heard of me. Foe John truly baptized with water; but ye shall be baptized with the Holy Ghost not many days hence.’”  [Acts 1-4-5]

About our Guyanese Nation 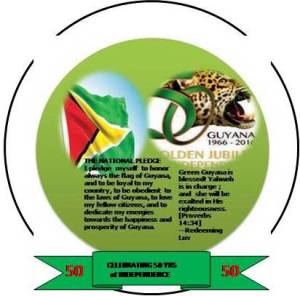 Today marks fifty years since Guyana became an independent Nation, i.e. from May 26, 1966 to May 26, 2016.
We celebrate with thanksgiving.

Now concerning our Guyanese nation it is a multi Ethnic one. In these various groups there is like mindedness to some extent by some for the purpose of fulfilling their personal, political, economic, or other, goals which contribute nothing in terms of the establishment and further advancement of a genuine Guyanese Society.

In my humble opinion, there is yet to create a Society of One people, One Nation, One Destiny according to the words of our Motto at the bottom of The Coat of Arms. Ideally this may be so, but in reality it is not so as yet. For Guyana to become society of One Nation, One People, One Destiny, I believe that (1) the revolution must first start in the individual so that the individual first becomes the change, and (2) dynamic leadership in this regard on the part of the Government; genuine cooperation from the leadership on the part of the opposition, and leadership at all levels; the Private Sector, Religious Groups; Institutions such as the Home, the School from the kindergarden level to the University level, etc.,  and right down to the last man at the grass root level, as they call it, is of vital importance.

Beloved, the New Green Guyanese “Society” to which I refer may be defined in one word, that is,   “Cooperation.” In truth and in fact it is through social cooperation, like-mindedness, and guidance by wisdom from above, Guyanese with a common interest, will, with a New Mind Set, ― a super mindset, advance a Society of One People, One Nation, One Destiny, ―with scope for innovation;  and extension, Locally, Regionally, and Internationally.

I urge Guyanese everywhere to pray that the words of our Guyanese motto created and written on the Coat of Arms some Fifty Years (50) become a reality within the individual such that there would be a common likeness in this regard,― to create such a society as a way forward as of now…, even as we celebrate our Golden Jubilee of Independence, with thanks giving.

May Yahweh richly bless you and your household, in Jesus’ name. Amen.

Serving in the newness of spirit,